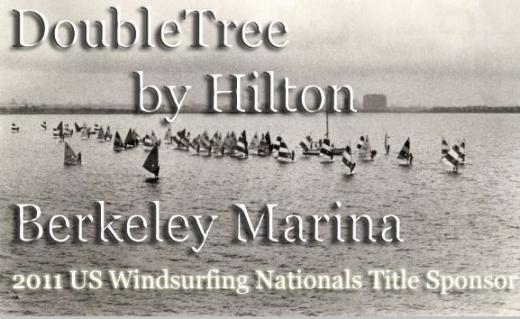 It’s been a while since Windsurfing has signed up a large out of industry sponsor to support its premiere US racing event, the US Windsurfing National championships but times are a changin’.

As companies have come to realize however there is almost no more effective advertising spend than one that truly compliments and supports its patrons. We all know windsurfers are a nomadic bunch crisscrossing the globe in search of the best winds and the folks over at the DoubleTree by Hilton Berkeley Marina know this too. So it was no surprise when National Championships lead organizer, Jane Morson, announced the signing of the DoubleTree by Hilton at the Berkeley Marina as this year’s title sponsor.

“Organizing, and also being behind the scenes help at Windsurfing events for a number of years, I have tried to listen and learn from what attendees have had to say. ” says Morson. “There always seemed to have been accommodation problems, and this year we have solved this for everyone”.

The 2011 Windsurfing National Championships are set to fire off in Berkeley July 11th through the 16th of this year and with DoubleTree by Hilton having one of its own hotels sharing the land just down the road it made perfect sense that the hotel would want to be in on the action. The hotels picturesque resort-like setting is accentuated by the stunningly appointed facility and the hotel is ideally situated at right at the Berkeley Marina (pictured at right). These racers can look forward to a plethora of discounts in the form of discounted room rates, discounted food and beverage, and even free parking. When combined with the hotels panoramic views of the San Francisco cityscape and astonishing Golden Gate Bridge views it’s going to be an event to remember for those taking up the DoubleTree on these generous offers. (pictured belo left an example of the rooms racers can look forward to.

Morson continues “It has been an absolute pleasure working with the DoubleTree by Hilton Berkeley Marina’s, Director of Sales & Marketing, Brooke Meyer, and it was my complete honor when they signed on to support the event. I look forward to seeing everyone at this year’s Nationals.”

Interested in attending the event? Click Here to reserve your room at the DoubleTree by Hilton at Berkeley Marina.

This year’s event promises to once again bring big winds and wild water the San Francisco bay is famous for but the highlight just may be the complimentary warm chocolate chip cookies waiting for you when you get there!

The notice of race is posted at http://www.formulawindsurfing.org/nor.php?id=129

About the Berkeley Yacht Club

Berkeley Yacht Club is in the Berkeley Marina, on the south side of the harbor entrance channel. The club was founded in 1939, and the clubhouse was built by members between 1940 and 1974. The clubhouse includes a bar, lounge, and dining facilities, and the bar and lounge areas feature a spectacular “three-bridge view” of San Francisco Bay.There is a guest dock, but the club does not provide permanent berthing. Berkeley Marina is a municipal marina, operated by the City of Berkeley.

There are approximately 250 active members. BYC was among the first yacht clubs in the Bay Area to become entirely non-smoking in 1992.

Berkeley Yacht Club prides itself on being an active participant in supporting the community in which we live. For many years we have had a junior program in conjunction with the Berkeley Boosters focused on introducing at-risk or disadvantaged youth to boating.

Berkeley Yacht Club uses minimal professional staff. Bartenders are usually members, and when there is no bartender on duty the members are free to serve from the bar themselves. Members have keys to the club, and in contrast to many other yacht clubs that are closed during most of the week, BYC can be opened any time by members who wish to use the lounge, bar, or kitchen facilities.

Interested in attending the event? Click Here to reserve your room at the DoubleTree by Hilton at Berkeley Marina.