With just 6 board sailors in the formula windsurfing class, our fleet saw the core racers in action but it was Seth Besse who showed the most consistency to walk away with all 6 bullets.

I thought I might get the first one- leading around the course but failed  to cover on the last 2 legs and let Seth and Crad slip into the top positions. CRad and I rounded the bottom leeward mark in a pack of lasers on the outside of the pinwheel. Despite the dirty air, the formula boards are traveling so fast compared to the dinghies that it only takes a few seconds to clear and get through any bad air.   We tacked and were overlapped heading into the finish with CRad edging me out by shooting the line at the just the right moment.

Race 2 started with a true sportsmanship from our fleet. Rather than start with just 3 guys we abandoned the sequence in order to wait for the guys who went to rig down in the building breeze. Im not sure- Ive ever seen this happen but it sure is a lot more fun to win when you’re racing against all the competitors.

Seth and I were close midway through the race. I tacked just below him on the 2nd beat up thinking I would be able to squeeze him out with better angle from below but he had enough speed to roll right over the top of me. 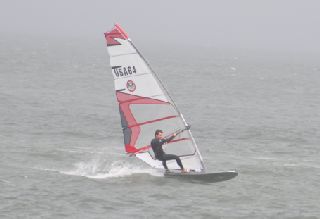 In the high speed racing we do on formula boards, its not often you get more than 1 or 2 chances to make a move on the course. You’ve got to see it coming and when it happens capitalize on it immediately. When racing is tight, you’ve got to be able to utilize your best asset otherwise its waiting for the guys in front of you to make a mistake.

Race 3 saw more of the same in a building 18-22k breeze. All of the fleet was on the 9.5 or 10’s as the ebb increased and racing took it’s toll.   Consistency  paid off for Seth as he scored another bullet with Al and I rounding the top 3.

Day 2 saw 3 more races for all fleets + the chance to sail in the flood tide before the ebb really kicked in strong at 2pm. The usual pecking order established itself quickly as Seth got out to an early lead again with great speed. I had 2nd all but wrapped up again in front of Al coming into the finish line but had to duck below 2-3 lasers and barely eeked out across the line salvaging 2nd in what could have been disaster.

Race 5 saw the tide switch and the committee board swing from straight downwind to straight upwind despite a fresh 18-22k breeze I realized what was happening but failed to take into account the relationship of the starting line. It was now a slalom start and I was over early. Clearing myself I decided to get some separation from the fleet to get any advantage I could. When your behind, you really don’t have too much too loose and your risk can be bigger. I separated form the fleet during the next 4 legs and clawed my back but charged a bit too hard and went swimming on my last gybe to the leeward mark.

Race 6 started in 22-25k and a big ebb. All of the fleet was on either 9.o’s, 9.3’s or 9.5’s and 64-67cm fins. Anything else was just too big to handle in the chop and breeze.  Control was the name of the game. Seth jumped out to an early lead while I got buried at the start.  I kept going despite the bad air and made my moves when I could, finally powering over CRad on the final downwind to get another 2nd.

Overall another  great weekend of racing on the San Francisco Bay!