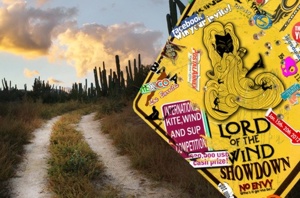 It was billed as the ultimate showdown between kiters and windsurfers with 3 events spanning 9 days on the sea of Cortez on southern tip of the Baja California peninsula. While the kiters showed up in numbers, the windsurfers still found ways to keep the bragging rights for another year. At the end of the day- we found we had more in common than what separates us and in hindsight, I’d say it was more a gathering of the tribes- where we all spoke the same language- wind!

After enduring what seemed like a windless (and snow less) fall and early winter in northern California- I made plans for my first trip to Baja. I hooked up with our local kiting crew who use the events as a testing ground to where they stand in the off season. The Heineken van made the trip down on Christmas eve packed with 6 sets of kiting gear & 4 people. Rock star siblings, Erika and Johnny almost made it only to be delayed on Christmas morning when their front differential fell out and their 4 wheel van quickly turned in a 2 wheel van.  In Mexico- anything is possible and after a 6 hour delay and trading some beer for labor they were quickly back on their way.

I arrived 2 weeks later for the first event skipping the road trip and flying directly into Cabo.

The Lord of the Winds Showdown in Los Barriles hooked up with the Travel Channel who was featuring the Sand Masters show at the same time. If you’ve never seen it, these guys create unbelievable works of art in the sand. Their final creation was a huge sand stage for the Lord of the Winds where Johnny ‘Pacifico’ Heineken was crowned Lord of the Winds after taking the long distance race.

To say there is a bigger emphasis on fun vs a normal regatta would be an understatement.

We came in from racing with the race staff handing us a Pacifico as our official check in.

The windsurfers won the pre-party with Josh Samperio crushing the kiting and SUP crowd in a 42 sec binge under the beer tap bookmarked by double shots of tequila vs a meek 20 secs performance by the kiters.

The first day of racing saw over 40 heats of slalom run on a 10 mark downwind course. It was super exciting to see the kiters try to figure this one out as there’s still a mix of sailors using course boards, twin tip boards and even surf boards.  The windsurfers looked the most graceful in the 16-22k breeze laying down their gybes and generally staying untangled compared to the kiters. It was Tyson Poor who dominated the slalom with a string of bullets followed by Bryan Perez and myself in 3rd.

We followed the next 2 days with course racing and a long distance race where the wind never really materialized above 15k so the kiters had a huge advantage making it look easy with the course gear and 15m kites compared the windsurfers who were on slalom gear and 7-8m rigs. In one race, we had a humpback whale emerge from the water just at the windward mark as we were rounding it.

I’m pretty envious of what the sport of kite racing is doing with the gear evolution and the amount of sailors they are attracting. It’s almost as though history is repeating itself after windsurfing’s peak in the early 90’s. Several of the world’s top ranked kite course racers hail from the SF Bay and for the past years they’ve progressed as a group- training together & sharing info freely. As a result, the group has raised the benchmark much more than any sailor could do on their own.  Next year, I vowed to either come back with a kite or a formula equipment to be better matched.

Next up, we packed the van up for a short trip up the coast to La Ventana and set up camp in the arroyo. They say the Mexicans don’t enter the water from march to October and its only it’s the crazy wind starved gringos who travel from the northern US that endure the fierce ‘el norde’ winds. It was amazing to see how many wind junkies make the trip down from the northern US and Canada for several weeks or months in the winter. There are literally hundreds of sailors camping on the beach living off the grid in their RV’s or tents and enjoying the sea and the wind in southern Baja. All you really need is some protection from the wind and the sun and you’re set.  The food is cheap and the liquor even cheaper. I never once worried about my safety while in Baja. There are several camps where sailors have built elaborate structures for cooking and showing outdoors and most importantly- keeping your sails rigged up and ready and out of the UV.

It takes the meaning of beach bum to a whole new level!

This grasshopper still has a thing or two to learn as I realized a Baja fog beats the SF fog any day of the week.

We started off the racing by joining the weekly slalom series at Playa Central in La Ventana run by the legendary Alex Aguera. It was a no BS event with several rounds of slalom for amateur and professional kiters and windsurfers. I again managed a 3rd behind Tyson and Bryan getting schooled by my lack of time on the water the past few months. Nonetheless it a great tune up for the La Ventana Classic to follow.

The next day we started the La Ventana Classic. This is the first lucha libre Mexican wrestling themed windsurfing Ive ever been to in my 25 years in the sport. On Saturday evening we all gathered in the city’s main square for a classic lucha libre wresting showdown. It was way better than any B rated movie you’ve ever seen and kept us entertained the whole evening. A greased pig catching contest followed with the windsurfers edging out the kiters again.(Windsurfers 2: Kiters 1 if you’re keeping still keeping count)

Bring out the gimp…(it must be a kiter thing)

The rivalry continued throughout the event as the big match up was the long distance race which pitted the kiters vs the windsurfers in an 11 mile reach from the island of Ceralvo back to La Ventana. 99 sailors packed our gear on the local fleet of fishing boats for a 8 am transfer to the island and waited for the wind to build around 2pm. I never realized how good a beach fire could feel at 11 am!

Tyson Poor on a JP 112l slalom board and 7.8m rig had a good lead built up at the first mark with Johnny Heineken on his 13m kite in hot pursuit. Next was a 1.5 mile downwind leg and small reach to the finish. This is where the kiters made huge gains. I rounded in 5th at mark 1 and slipped to 11th at the finish as 6 kiters looped straight downwind in the finish while we had several underpowered downwind reaches eating lots of ground. Tyson and Johnny rounded the last mark overlapped with a final 10 second reach to the finish just in front of the beach. It was Nascar type racing at its finest with Tyson not allowing Johnny to pass him with several aggressive moves to keep him in front and take the bullet by a mere 3 feet.

The windsurfers held on this year but its obvious the sport is changing with kiters outnumbering the windsurfers almost 10:1. We still won the party, the greased pig contest, and the Classic so to say the sport is dying is simply wrong.

We completed 3 more days of course racing where I managed to finally get the top spot at the end of the regatta in the windsurfing course racing. My prize was a huge lucho libre belt emblazed with all the classic mexican mojo you could imagine.

Im not sure I could have had a better time with a better group of people. Except for Montezuma’s revenge, the Baja experience is something Im hoping to repeat next winter.